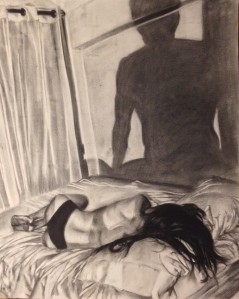 i have a love-hate relationship with artist statements.  its right up there with resumes, & self-evaluations.  sometimes it seems making the piece was easier to create than that short statement that’s adjacent to your work.  it always feels more like a psychological test than a simple explanation of intent.  youre damned if you over simplify your objective, & youre damned if you dont at least try to convey that there was even a slight fleeting thought that motivated it.  i like to learn from the statement the medium used when installations seem effortless or on the flip-side, incomprehensibly complex.  other times, i read it to verify that what i got out of the work is what the artist intended me to get out of it… but thats the funny thing about art — once its created, it really doesnt matter what you meant to say, because people take it how they want to take it.  they appreciate it, or depreciate it as they see fit.  sometimes i think art can do without the statements entirely, and other times i wish they were more upfront.

my final college body of work was based around this internal struggle i had, about how what i make can be conceived, then perceived, any which way.  i wanted to create images that motivated the viewer to draw on prior experiences, memories, or maybe just their gut, and build a narrative around what they see.  their own biases fill in the gaps.

my work also ventured into role reversal, and playing with tensions either via body language, juxtaposition of figures, or the building up of pigment on the paper.

i suppose what i just wrote could function as an artist statement, and it actually may be a lot better than the ones i submitted for grades along with my art, because its candid.  either way, purging/sharing my struggles and successes will help me in the long run.

thats the funny thing about support
people tend to know how they need it best.
its one of the few times you need to be selfless,
in order for it to be genuine.

choosing when, & how
it bests suits you to give it,
defeats the purpose entirely.

its not about you.